The Zaanse Schans is one of Holland’s top tourist locations.

It’s a unique area where people live and work, with museums, windmills, shops, old crafts, restaurants, an information centre and a boat tour. The site gives an excellent picture of the Zaanstreek in the 17th and 18th centuries. Walking between the traditional timber houses, warehouses and windmills in the Zaanse Schans, you get the feeling that you’re back in the long-gone past.

History
The Zaanstreek is a marshy area that dates back centuries. The Zaan river – a major waterway in North Holland – drained the marshes. A sizeable system of dikes and dams must have existed as early as the late 13th century.

Buildings
The historical development of building styles, architecture and decorative elements, as well as the traditional building materials, are easy to follow in the Zaanse Schans. The most suitable building material was timber as the peat soil is quite unstable. Moreover, a lot of timber was available because many of the windmills were sawmills.

Landscape
The Zaanstreek is a centuries’ old marsh, taking its name from the Zaan river, which is a major North Holland waterway into which the marshes drained naturally. A sizeable system of dikes and dams must have existed as early as the late 13th century.

EIHR anchorage
The European Industrial Heritage Route links together 60 ‘anchorages’ that were decisive for the development of European industrial culture. This EIHR route is a European network of national industrial heritage pathways in the UK, Germany and the Netherlands. The Zaanse Schans was named an anchorage in 2006, since when it has been one of the high points in tours of Holland’s industrial heritage. 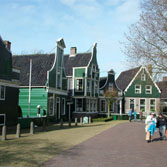 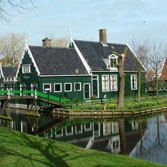 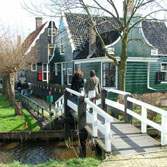